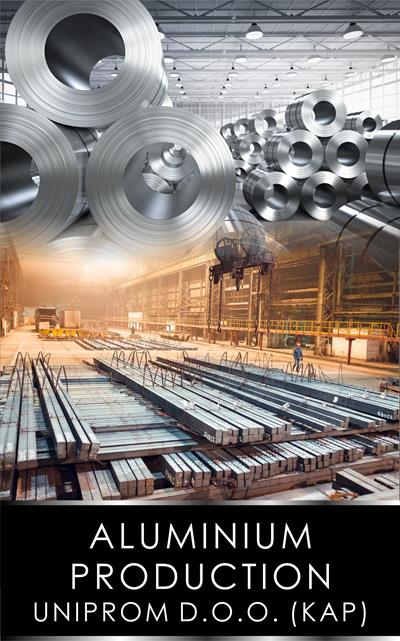 Uniprom has created an amazing and innovative industrial zone (park) in Podgorica, the capital of Montenegro. Several modern plants (factories) are situated here, providing employment to hundreds of local citizens. From July 2014, when the land was purchased from bankrupted KAP (Kombinat Aluminijuma Podgorica), Uniprom has invested over €20m in capacity increase, equipment overhaul and modernisation. Today, Uniprom is proud to be one of the country's largest manufacturers and exporters, with ample room for growth in the coming years.

Uniprom's business zone in Podgorica has major advantages for manufacturing facilities which wish to develop their production capabilities:

The industrial zone is located near several important infrastructure points: the main international airport of Podgorica, an internal railway connected to the regional railway Bar-Belgrade, a distance of only 53km from the largest port in Montenegro (Bar). A new highway is being completed near the zone which will connect Uniprom to the main road Podgorica-Cetinje-Budva.

Electricity systems, transmission lines and substations have all been improved and allow for cheaper energy. A long-term contract with Elektroprivreda (Montenegro Electricity State Co.) has been signed for continuous electricity supply.

The plant is connected to a sophisticated water supply and sewage infrastructure; the wastewater treatment plant is located on the coast of the Moraca river.

In cooperation with Uniprom Energy, a network for natural gas supply (CNG and LNG) has been installed throughout the Uniprom zone. Thus, all current and future users can be connected to it, providing major energy savings and benefits to the environment as a result of reduced emissions.

The aluminium industry represents an extremely competitive and highly consolidated industry. The main reason why most of the global output has been divided amongst a small group of producers lies in the fact that the aluminium production process is highly complex and capital intensive.

The process of aluminium production consists of bauxite extraction (note that bauxite resources are scarce worldwide), alumina production and smelting of aluminium. Uniprom's experience, led by its principal Mr. Veselin Pejovic who has been involved in the industry for decades, combined with its own proprietary technology and steady access to cost-competitive energy, enables the establishment and on-going cost efficient production scheme.

Furthermore, the best equipment and machinery in the world has been ordered (one supplier is Hertwich Engineering from Austria), which will save on manpower and costs due to the high level of automation and equipment design. To complement the highest quality metal which will be produced, Uniprom has also hired international expert engineers to manage the process engineering, data management and overall operations.

The total value of this project is €11 million.  The total production of 30,000 tons of primary foundry alloys is intended for foreign markets, which will significantly increase the value of exports by domestic companies by approximately US$75m,  thus contributing further to the Montenegrin economy.

On 18th August of 2020, Uniprom has put into operation the factory of aluminum billets within the Uniprom Aluminum Plant, which provides 70 new jobs. The capacity of the factory will be 70,000 tons of billets per year, the value of investment is close to 15 million EUR.

The opening of the factory was attended by the President of Montenegro Milo Đukanović and the Prime Minister Duško Marković.

Prime Minister Dusko Markovic said, that the European path is a process of thoughtful strategic transformation of all segments of our society, including the industry.

The Prime Minister said, that today we are witnessing, that in 16 months the new factory has opened its gates for about 70 new workers, that the investment worth about 15 million euros was realized in a very short time and that it will start annual production of as many as 70 thousand tons of billets total value about 175 million USD. "A product of standardized quality, which is listed on stock exchanges from London to Chicago and whose value dictates the moves of the largest global corporations. Today, when we witness six years of healthy and good work it is easier than ever to say that the aluminum industry still has a lot to offer Montenegro…invested amount of about 25 million euros, materialized in two new factories, raises the final product of the Montenegrin aluminum industry one step higher. Just as we witnessed the first step last year - a fundamental change of approach, today we confirm the right path. The path to the production of final products, which, when we reach it, will be the final proof of the transformation of our industry into a modern developed industry. Five decades of tradition and lessons learned from numerous temptations, even some situations that seemed hopeless, but above all the determination, dedication and inventiveness of the current owner, Mr Pejovic and management team, oblige all of us to treat the potential production of aluminum with special sensibility in the future." Markovic said.

"Such projects strengthen the Montenegrin economy and affect the improvement of the quality of life of our citizens," said Djukanovic.

Mr. Pejović pointed out that the billet factory, together with the alloy foundry, will reach a production whose export value is over 200 million dollars a year. He also announced the start of works on the third factory by the end of year.